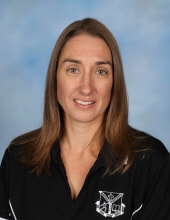 ​Where did you grow up and go to primary and secondary school?
I grew up in Ensay and went to Ensay Primary School until I was 11 years old.
My family moved to Bairnsdale at the end of Term 3, and I went to Bairnsdale West Primary School to complete Grade 6 in Term 4.
In 1992 I started Year 7 at Bairnsdale Secondary College and graduated Year 12 in 1997.

How long have you been involved in education?
I have been involved in education since my two girls went to Kindergarten, where I was a parent helper and a member of the Committee for 5 years.
In 2016 I was an Intergration Aide at Westdale Kindergarten for 12 months.
I began here at Bairnsdale Primary School in 2017, as ES Support in the Prep room and this year I am ES Support in a Grade 3/4 class.

What do you like to do with your spare time?
In my spare time I like to keep fit and healthy.
I am busily involved with Netball (my favourite sport), where I play B Grade for Bairnsdale Netball Football Club, and I also coach an U11’s team in the Thursday night competition.