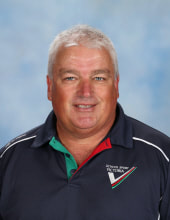 ​Where did you grow up and go to primary and secondary school?
I was born in the Bairnsdale hospital and lived in Swifts Creek all through my primary and Secondary School Years.  My mother, two sisters and two brothers still live in Swifts Creek  I worked in the timber mill at Swifts Creek for a number of years as well as a summer on the forestry fire crew while also making a couple of attempts at moving to Melbourne for work and university. I completed my teaching degree at Melbourne University in 1997.
How long have you been involved in education?
I have been teaching since my first teaching position at Omeo Primary School in 1998.  Since then I have worked in full time and part time in a number of schools in the East Gippsland area including Bairnsdale West PS, Nicholson PS Lakes Entrance PS and Benambra PS.  I have been teaching at 754 since 2002 in a number of positions including all classroom levels from Prep to grade six and also as a specialist teacher in the areas of Phys Ed and Science.
What do you like to do with your spare time?
“Spare Time” for me usually means running around after my kids and taking them to footy, cricket, hockey, rowing, work or whatever they are doing at the time.  I have one daughter at university, one working her way through a gap year and a son in year eleven at the Secondary College. On the school holidays I usually try to fitting a couple of games of golf.  I have also recently retired (I hope) from a three year (mostly unsuccessful) comeback to the cricket field at Meerlieu Cricket club through which I have enjoyed the opportunity to play on the same team as my son Reuben and also with a number of current and ex 754 students who have come up through our own Meerlieu/754 junior cricket team which I will keep helping out with in coming seasons.  I also love to get back to watch my old Swifts Creek footy team and getting down to Melbourne to support North Melbourne but funnily enough both clubs this year are rather disappointingly at or very near the bottom of the ladder.